The automotive industry affects lives across the world in many ways as it employs millions of people directly and indirectly. For much of the developed and developing world, it is a flag of economic progress.  A unique phenomenon, which has dominated the twentieth century, it is impossible to develop an efficient steel business, a plastic or a glass sector, or any other central foundation of economic progress without the presence of the automotive industry.

The scale and influence of the automotive industry is vast. Roughly 1.7 million new passenger cars and trucks are built around the world each week; they are easily the most complex products of their kind to be mass-produced in such volumes.

The global automotive industry is a key sector of the economy for every major country in the world. The industry continues to grow, registering a 30% increase over the past decade.

Building vehicles requires the employment of people directly in making the vehicles and in parts that go into them. It is estimated that each direct automotive-job supports at least another five indirect jobs, as many are employed in automotive-related manufacturing and services. Automobiles are built using the goods of many industries, including steel, iron, aluminium, plastics, carpeting, textiles, computer chips, rubber and other elements. 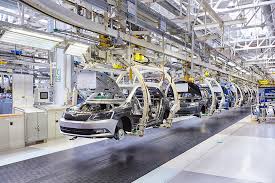